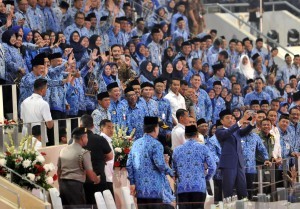 Although the Indonesian Civil Servants Corp (KORPRI) has been giving major contribution to the development of Indonesia for the last 47 years, President Joko Jokowi Widodo reminded members of KORPRI to continue provide better service to the people and the country.

We are facing a very rapid social and economic changes, therefore the State Civil Apparatus (ASN) should quickly adapt along with the changing times, said President Jokowi in his remarks at the 47th Anniversary of KORPRI Ceremony, at Istora Senayan, Jakarta, Thursday (29/11).

The industrial revolution 4.0, the President continued, has brought changes to the social, political, economic, and cultural landscape throughout the world. On the other hand, the technology also helps to facilitate people to convey their aspirations and to request better service from the ASN.

The use of technology both from the public and the business world, according to the President, will inevitably increase the speed of service demands of the ASN. Thus, the ASN must serve the community better by improving the quality of work while still maintaining accountability.

ASN must always be open minded, continue to innovate, and simplify the work process by using advance technology and collaborate with relevant parties, said President Jokowi.

Moreover, President Jokowi asked the ASN in all levels and all sectors not to be trapped in sectoral egos.

By utilizing science and technology and putting aside sectoral ego, I am sure our ASN can contribute better to the community and the country, said President Jokowi.

President Jokowi explained that in the past 4 years, the Government had focused on infrastructure development to open isolation, build connectivity, strengthen national unity, improve service to the community and build new economic centers.

However, starting from 2019, according to President Jokowi, the Government would change the flagship program from infrastructure into a massive program to strengthen human resources development.

For this reason, the quality of human resources in all ages and all sectors must be increased significantly. Our human resources must be able to face and take advantages from the world changes and technological advancement, President Jokowi added.

President Jokowi also asked all ASN to prepare themselves to become agents of transformation in strengthening human resources.

With the role of ASN throughout the country, I believe the transformation of the quality of our human resources can be done on a large scale and will bring positive results for the betterment of Indonesia, President Jokowi said.

On the occasion, President Jokowi also congratulated the 47th Anniversary of KORPRI to all KORPRI members. Uphold KORPRI principals and continue to serve the country, President Jokowi concluded. (RSF/JAY/ES)