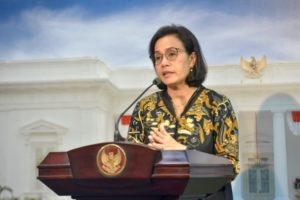 The national economic recovery has shown a notable improvement as success in dealing with COVID-19 pandemic is expected to continue in the third quarter of 2021, according to Minister of Finance Sri Mulyani Indrawati.

“We need to keep this positive momentum by maintaining public confidence in the performance of fiscal policy in the State Budget,” the Minister said in a press conference on the State Budget of September 2021 Edition, Thursday (23/9).

The improvement of state revenue in the State Budget, according to Sri Mulyani, is supported by growth in tax, customs and excise revenues, and the non-tax state revenue (PNBP).

On the state expenditure, the State Budget served the community in the form of maintained state spending in supporting the implementation of Community Activity Restrictions (PPKM) during the pandemic. The state expenditures reached Rp1,560.8 trillion, consisting of the Central Government expenditures at Rp1,087.9 trillion and Rp472.9 trillion allocated to regions and village funds.

The budget spending at ministries / institutions also grew by 21.5 percent, which include capital expenditures through basic infrastructure / ongoing connectivity projects, pandemic-related goods expenditures in the form of vaccinations, hospital claims for patient and productive assistance, as well as distribution of various social assistance program.

“This is what is called a state presence. However, health and sustainability must still be maintained,” she said.

“We use all levels of income, spending, every budget very carefully. That way, we hope the economy will continue to grow and the State Budget will start to improve again,” the Minister said. (PR of Ministry of Finance/UN) (RIF/EP)