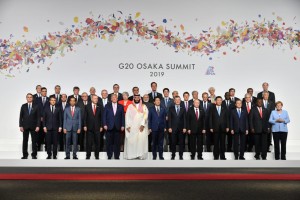 President Jokowi and other state leaders attend the G20 Summit Opening Ceremony, at INTEX Osaka, Japan, Friday (28/6). (Photo by: Secretariat of the President)

President Joko Jokowi Widodo attends a series of the G20 Summit at INTEX Osaka, which was officially opened by Prime Minister of Japan Shinzo Abe on Friday (28/6).

Afterwards, the President is scheduled to hold several bilateral meetings. Later in the evening, President Jokowi and First Lady Ibu Iriana will head to Osaka Geihinkan where cultural program and leaders dinner will be held.

According to Andri, the leaders congratulated President Jokowi in several occasions on the sidelines of G20 Summit, among others before official welcome and family photo session, as well as before the Leaders Side Event. (EN/GUN/ES)