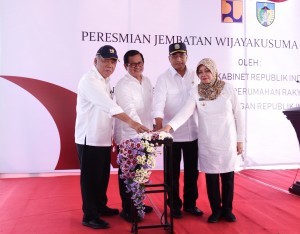 According to Seskab, the Wijaya Kusuma Bridge will open the isolated area in the west and east part of Brantas River, namely Mojo and Ngadiluwih District, and he expressed his hope it will increase Kediris economy. Hopefully, agricultural yield from west part which was previously isolated could be directly distributed to east part of the river because most of the consumers are in the east.

Pramono acknowledged that this bridge was part of his dream since he was appointed as a legislation member representing Kediri. The construction would not be implemented without President Jokowis permission who pays a special attention to infrastructure development and connectivity in Indonesia, he further said. I would like to express my gratitude to the President, without his permission this bridge would never be existed. 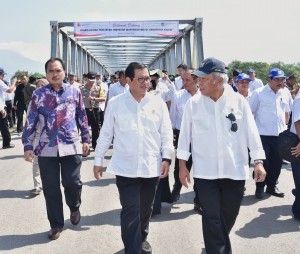 Wijaya Kusuma Bridge is 180 meter in length, 7 meter in width and has pavements on both right and left sides with the length of 1 meter. The construction cost Rp32.7 billion of state budget.

Started in May 2017, the construction connects not only areas in Kediri but also ring road of Wilis Mountain covering Kediri, Tulungagung, Blitar, dan Trenggalek.

The name of the bridge was taken from a favorite flower of Seskabs mother and coincidently of Minister Budi Hadimuljonos father too, Pramono asserted. It is hoped that this bridge will be a symbol of peoples prosperity in Kediri District and City. It is our pray for the late mother and father who had raised us. We also hope that it will benefit all of us and our ancestors too, Seskab said.