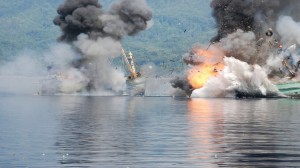 After drown three (3) foreign ships with Vietnamese flag in Anambas Island, Riau Islands some time ago, the government again showed the seriousness in securing Indonesian waters from the fish thieves.

“Sinking of ships is done by blown up, just the same as before,” said Kadispen Lantamal IX Ambon Eko Budimansyah, in Ambon, Sunday (21/12) afternoon.

The Crew are Thailand Citizen

Although those both ships are the PNG flagged, but the ships, which each stole 200 tons and 43 tons of fish, have crew of Thailand and Cambodia citizenship.

As for the KIA Century 7 that skippered by Thong Ma Lapho, carrying 17-crew of Thai nationalities. (*/ES)