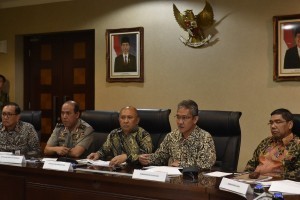 Director General of Budget of the Finance Ministry Askolani, accompanied by Presidential Chief of Staff Teten Masduki, delivers a press statement at the Office of Presidential Staff, Jakarta, Friday (6/1) afternoon.

The increases in administrative fee of the issuance of Vehicle Registration Document (STNK) and Vehicle Ownership Documents (BPKB) as stipulated in the Government Regulation (PP) No. 60 of 2016 on Types and Rates of Non-Tax State Revenues (PNBP) that applies to the National Police of the Republic of Indonesia (Polri) which enters into force today (January 6, 2017) primarily aim to improve public services.

“About 92 percent of the PNBP derived from the Polri institution will enter into state revenues then be used to improve public services provided by the Polri,” Director General of Budget of the Ministry of Finance Askolani said in a statement to reporters, at the Office of Presidential Staff, Jakarta, Friday (6/1) afternoon.

In a press conference attended by Presidential Chief of Staff Teten Masduki, Askolani asserted that this PNBP is earmarking in nature, meaning that when it was deposited into state revenues then the money will go back to the people to fund activities associated with the PNBP sources. “For example, the PNBP rates for the issuance and extension of the STNK should only be used for activities associated with the issuance and extension of the STNK,” he said.

The initial proposal of adjustment of the PNBP in the Polri, according to Askolani, comes from the Supreme Audit Agency (BPK) and the Budget Board of the House of Representatives (DPR RI), as they found an increase in the materials for the STNK and BPKB. “The Board suggested that the PNBP rate in the Polri which has been in force since 2010 be revised,” he explained.

With recommendations from the BPK and Budget Board, Askolani further continued, the Polri proposed it to the Directorate General of Budget of the Ministry of Finance to discuss the PNBP rate and then submitted the PP regarding the rate.

“The rate adjustment of the PNBP is made because the basic rate is no longer appropriate (based on the conditions in 2010). The basic rate in 2010 is then increased in 2016, so that the service can be upgraded in a quick, online system with assurance of a more transparent and accountable rate certainty,” Askolani said.

Previously, Head of Public Relations Division of the Polri Inspector General Boy Rafli Amar said there were several reasons concerning the rate adjustments in the Polri, whose main purpose is to improve services to the public.

First, the enhanced security features on the STNK material as a valuable document in the Vehicle Document Registration Center (Samsat) services throughout Indonesia.

Second, the increased budgetary support to improve services related to the STNK administration in the Samsat throughout Indonesia.

Third, the rising cost of equipment maintenance of Samsat and support of network cost in order to provide services through an online system in the entire precinct/sub-precinct (polres/polsek) police throughout Indonesia.

Fourth, the modernization of the Samsat computerized tools to meet service standards throughout Indonesia.

Fifth, budget support for the development of infrastructure and facilities of Samsat offices throughout Indonesia.

Sixth, the costs for the STNK material preparation and its supporting and adjustment of incentives for service provider to avoid irregularities.

Seventh, the increase in the training cost and competence certification of STNK service provider throughout Indonesia.