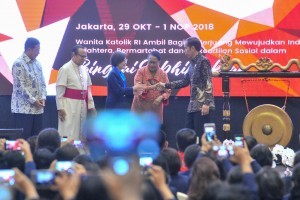 President Joko “Jokowi” Widodo reminded the public not to easily believe in hoaxes and rumors. The hoax and rumors, according to the President, will degrade the quality of democracy.

“(The hoaxes and rumors) can divide us, if we don’t bear in our mind that regional elections and presidential election are just regular event happening every five years,” President Jokowi said in his remarks at the 2018 Congress of Indonesian Catholic Women (WKRI), at Grand Mercure Hotel, Jakarta, Tuesday (30/10).

The President cited an example of a hoax saying that he is a supporter of the Indonesian Communist Party (PKI); while in fact, the party was dissolved in 1965-1966 when he was four years old. The hoax also includes a picture of President Jokowi beside Aidit, a PKI figure, when he delivered a speech in 1955.

“I have checked the time of the speech and it was 1955, I have not even born yet, President Jokowi said.

President Jokowi also mentioned another hoax going viral on social media accusing him of becoming a puppet ruler working for foreign countries. To counter this issue, the President cited the example of Mahakam Block, once managed by France and Japan, that had been 100% handed over to Pertamina since 2015 and Rokan Block Chevron, that had been 100 % acquired by Pertamina.

President Jokowi further said that Indonesia has secured head of agreement and Sales & Purchase Agreement with Freeport, which stipulates that Indonesia gets 51 percent shares of the company.

“We get a 51 percent of shares. It is not easy to do this since we have to face political pressure and other pressures,” the President said, adding that the Government priority is to serve national interest.

Commenting on foreign workers, including from China which are rumored to reach 10 million workers, the President said that many people believe the rumor.

In fact, President Jokowi continued, there are only 80,000 foreign workers in Indonesia, and approximately 24,000 of them are from China. Meanwhile, Indonesian workers in China are more than 80,000.

“Other countries also accept foreign workers in order to improve the human resources of their country,” President Jokowi said.

Data shows that foreign workers in Indonesia are less than 1% of the total workforce. In the United Arab Emirates (UAE), foreign workers reach 80%, in Saudi Arabia 33%, Brunei 32%, Singapore 24%, Malaysia 5%, while Indonesia is only 0.03%.

“(Our foreign workers) are less than 1%. Why do people make a fuss about it? It’s easy to check the data. The immigration can provide the data,” President Jokowi said.

In the meantime, regarding the rumors of rising prices of basic commodities, President Jokowi said that inflation rate in the past was 9% or 8 %, but now inflation is below 3.5%.

“It means that the prices are under control,” the President stated, adding that he often goes to traditional market and talks to the sellers.

“I pay close attention to public demand. If we can find a solution, we will provide it. But if it’s difficult, for example related to imported goods, the solution will be more difficult since it has something to do with the international market,” President Jokowi explained.

The President further said that he went to traditional market in Semarang, and asked the sellers about the good prices. According to the sellers, the President said, the prices are relatively stable.