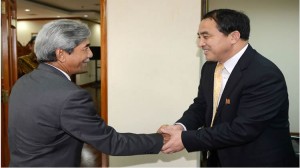 Deputy Foreign Minister of North Korea/Democratic People’s Republic of Korea (DPRK), Ri Kil Song has visited Indonesia on 12 to 15 February 2015 to strengthen the relations of friendship of Indonesia – the DPRK that has been tied since a long time.

“The meeting to discuss the efforts to improve bilateral relations the two countries, among others, through the celebration of the 50th Kimilsungia flower in 2015,” Foreign Affairs Ministry spokesman said as uploaded on the site www.kemlu.go.id.

Kimilsungia flower is orchid which is a sign of friendship RI and the DPRK that awarded by first President of Indonesia Sukarno to President Kim Il Sung in 1965.

Meeting of Deputy Minister of Foreign Affairs of both countries also discussed the importance of improving trade economic relations, whereby the volume of trade RI – DPRK recorded at 62 million US dollars in 2012, but the volume tends to decrease.

In the period of January – October 2014 the volume of trade between the two countries recorded only 2.8 million US dollars (down 82.24 percent over the same period in 2013). In this regard, planned for the Indonesian economy team’s visit to the DPRK and vice versa, which is expected to increase the volume of trade, and can further increase the bilateral relations between RI – the DPRK in the future.

On that occasion, Deputy Foreign Minister AM. Fachir also expressed the hope of the Government of Indonesia that the DPRK Leader Kim Jong-un can participate in the celebration of the 60th Asian-African Conference, which will be held 22-24 April 2015, in Jakarta and Bandung  (Kemlu.RI/ES)