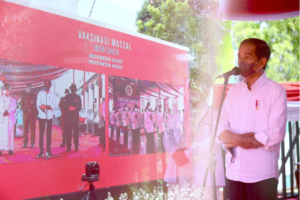 “Mr. President, I really miss them [teachers]. I really want to meet them and recite Al-Quran with them, Sir,” Rafi added.

Rafi expressed his gratitude to President Jokowi for the implementation of the vaccination drive, adding that, he also hoped that Indonesia can quickly exit the pandemic.

At the meantime, Luhut, a student of Sabilul Mukminin Islamic Boarding School in Binjai City, North Sumatra Province, was grateful that he has been vaccinated. He also told the President that he wanted to be a minister in the future.

“Thank you, Mr. President. My friends and I have been vaccinated. InsyaAllah, in the next 25 years, I want to be a minister like Mr. Luhut (Coordinating Minister for Maritime Affairs and Investment), Sir,” he added.

Another student from Sabilul Mukminim Islamic Boarding School, Siti Hajar, had a unique way to express her gratitude to the President. She recited a rhyme.

“Sungguh baik Pak Petani, pergi ke sawah menyemai benih. Terima kasih Pak Jokowi, saya udah divaksin nih. (So kind is the farmer, goes to the rice field to sow the seeds. Thank you Pak Jokowi, you are the best, indeed, I have been vaccinated),” Siti said.

In addition to the students, a number of school administrators and teachers also expressed their gratitude for the implementation of vaccination drive for students rolled out by the Government.

Furthermore, President Joko Widodo said that the Government will continue to roll out and speed up the national vaccination drive gradually in accordance with the vaccine supply availability. (TGH/UN) (AP/MMB)