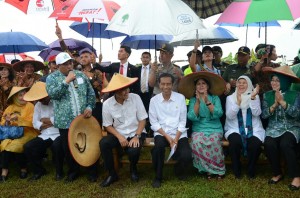 Accompanied by the Minister of Agriculture Amran Solomon and Governor of Central Java Ganjar Pranowo, President Jokowi said that the assistance of 6,082 units of hand tractor was not really free, but there is a target that is to increase production.

The president said that he would oversee the production target of rice in Central Java, because later after being given another of tractors, given more fertilizers, more seeds, this province should be able to increase production to 2 million tons.

President Jokowi promised, if the target could be achieved, then it will add another tractors, dams, and irrigation improvements. “Because of our concentration, I almost every Saturday and Sunday to go all over Indonesia to provide assistance of tractors,” he explained.

According to the President, the government set the target that within 2-3 years could self-sufficient in rice. Then, followed by soybeans, corn, and others agricultural products.

“We do not want agricultural commodities are imported from other countries. We are ashamed, we have a very spacious rice fields, but when I met with President of Vietnam I asked, President Jokowi when import rice again? Buy more rice from Vietnam, I feel ashamed,” Jokowi said.

On that occasion, President Jokowi said that we would continue to build dams, reservoirs. He mentioned, in Indonesia there are 49 reservoirs, reservoirs fix all. In Ngawi also conducted dams repairs, done so quickly, morning-afternoon-night done and 2 (two) weeks Insya Allah completed.

Related to the procurement fertilizers, Preside Jokowi said, that the corporate governance fertilizers also continue to be addressed. Admittedly, this is not yet good but in the arrangement progress. He guarantees, there is no such thing as delays in the distribution of fertilizers.

“I have to say to the Minister of SOEs if the fertilizer late again like this, Managing Director relating to the distribution fertilizers, I make sure that be removed from the position, not replaced but be removed. Otherwise we reiterate that way, would happen like this,” he concluded.