Suing the US Embargo, SBY Supports the Palm Oil Industry 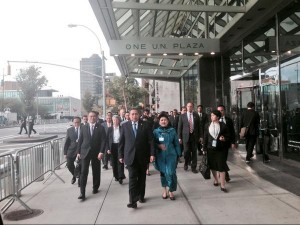 Suing the US Embargo, SBY Supports the Palm Oil Industry

President Susilo Bambang Yudhoyono (SBY), in the Park Hyat Hotel, on Wednesday at 8 p.m. local time ended his last abroad visit in New York, US, by attending the Sustainable Indonesia event held by Indonesian Chamber of Commerce and Industry, and also the Indonesian companies that work in forestry and land fields.

In the event attended by the representatives of civil society, businessmen, and government officers from Indonesian and US, President SBY spoke long enough about Indonesian palm oil industry that used to be embargoed by a number of countries because it caused environmental damages.

He mentioned that there are 26 million tons of palm oil yielded from 9 million hectare palm oil plantation in Indonesia, where almost its half (45%) is owned by small scale producer. In addition, there are 4 million people who work in palm oil industry indirectly support 12 million people and their families with US $16-23 income per day or twice from the income average in agricultural field.

While the proportion of 96 palm oil plantations and factories located in rural area, SBY continued that this industry has stimulated the local economic growth and has become the cantilever of developments in the outer islands in Indonesia.

I am glad that there is a bright future for palm oil industry. However, it does not mean without any challenge, President SBY said it while mentioning the five challenges faced by Indonesia as the biggest palm oil producer in the world.

Those five challenges are price stability, trade limits and barriers, live environmental issues, local issues, and challenges from the government.

Considering the complex matters, according to President SBY, the government needed to have partnership private sectors, local residents, civil society group, and the other interest holders in the management of forestry resources. To go forward, we have to stop putting finger on each other, he said.

President believed that besides looking for profit, palm oil industry has responsible for the environmental progress, whether economy, social, or live environment.

At last, President expected the success of New York Declaration implementation in forestry field and Palm Oil Pledge, and also expected the addition of participant numbers who stated their commitments.