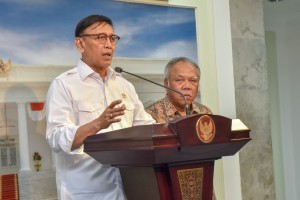 The Government is taking measures to ease the burden of the affected residents in the earthquake and the tsunami that hit a number of regions in Central Sulawesi province, Coordinating Minister for Political, Legal and Security Affairs Wiranto has said.

We are trying our best and hope for input and suggestions, Wiranto told reporters after a Limited Cabinet Meeting on the Rescue and Evacuation Efforts Following the earthquake and the tsunami in Palu and Donggala at the Presidential Office, Jakarta, Tuesday (2/10).

However, the Minister emphasized that hoaxes and misleading news that can unsettle the public will not be tolerated. Such action is not justified, he said.

Wiranto further said that he has already ordered Chief of the Indonesian National Police (Polri) to arrest anyone who takes advantage of the situation. Such action is very detrimental to us, especially when we want to ease the suffering of the affected residents, he added.

The Minister also expressed appreciation to reporters that continue to inform the public with reliable information.

I think that is a very good input for the Government to improve the plans and implementation of the post-disaster rescue and evacuation efforts in Central Sulawesi and the surrounding areas, Wiranto concluded. (RSF/MAY/JAY/ES) (GWH/EP/Naster)