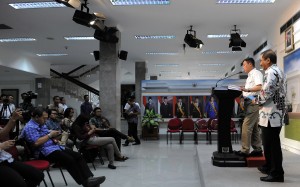 Also some of the funds intended for the development of road safety facilities, signs and so on, because the obligation of signs installation of national road is in the Ministry of Transportation,” said Minister of Transportation Ignatius Jonan told reporters at the Presidential Office, Jakarta, Thursday (15/10) afternoon.

Although the Minister of Tourism is targeting 10 destinations or travel destination priority, according to the Ministry of Transportation, within two years it had been involved in the construction of 19 destinations, which was previously the name of the National Tourism Development Strategic Area.

Additionally there are Toraja, then Tanjung Puting the development of Iskandar Airport Pangkalan Bun, Kuala Pembuang, Rahadi Oesman, and Haji Asan in Sampit, then the latter is Wakatobi.

“So we support the 10 plus 9, the other by the year of 2015 until 2016. Including those described earlier as well, namely Wakatobi, that there are Haluoleo Airport, I guess you know Kendari, and Matahora in Wakotobi,” Jonan said. (SLN/RAH/ES)/Sy.