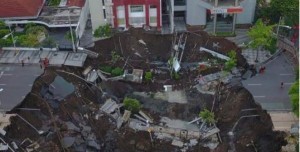 In respond to a giant sinkhole incident that appeared on Gubeng Road in Surabaya, Tuesday (18/12), the Meteorology, Climatology and Geophysics Agency (BMKG) urged the public to remain calm and not panic.

Head of Earthquake and Tsunami Information Center of BMKG Rahmat Triyono explained that the sinkhole measuring 30 meters wide and 8 meters deep is caused by a land subsidence, not a liquefaction.

There is no melting soil material at the location, Rahmat said, adding that based on the record of the seismic wave analysis, the hole is not caused by earthquakes.

The record does not indicate the existence of rocks movement and seismic sensors only recorded one sensor in the area, meaning that the incident caused by local activities, he added.

Furthermore, based on observations on the closest BMKG seismic sensor in Prigen Pasuruan, East Java province, the incident had already been recorded twice.

He also asked the public not to believe hoaxes and should only trust official information released on the BMKG website and social media to find out more accurate information. (BMKG / EN PR)