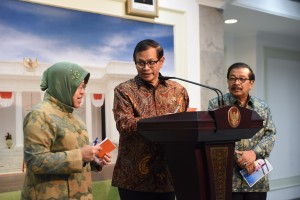 To help the people of Surabaya and Madura, President Joko Widodo decided to reduce the toll tariffs of Suramadu Bridge by more than 50 percent.

There was a debate whether it should be free or the tariffs should be reduced. Finally, with several considerations, the decision was to reduce the tariffs so that it could help the people of Madura and Surabaya, Cabinet Secretary Pramono Anung said to the journalists after a Limited Meeting at the Presidential Office, on Wednesday (3/2) afternoon.

Pramono explained that the Meeting also discussed the status of 600 hectares of land around the foot of the Suramadu,that will be removed from the management agency to the local government.

The authority of the regional government is on the Mayor as well the Governor. Hopefully, this decision could be a good early new year present for the people of Madura and Surabaya, Pramono said.

He added that the issue of 600 hectares of land around the foot of the Suramadu has appeared since 1990s. The people could not propose to change the status of their land

Meanwhile, regarding the decision to reduce the tariffs of Suramadu Bridge toll road, Governor of East Java Soekarwo said that it is a good decision because the cost to deliver goods from Surabaya to Madura and vice versa is quite high.

The purpose to build Suramadu Bridge is to increase the prosperity in Madura. It is the most important point. Pak President, Pak Vice President, and the Ministers have agreed to carry out this purpose as good as possible, Soekarwo said.

Surabayas Mayor-elect Tri Rismaharini expressed her gratitude to the President and Cabinet Secretary who have helped the people of Surabaya.

For decades, the people of Surabaya around the foot of Suramadu were suffering because they could not change their land status, even they could not carry out all land administrations.  Thank to todays meeting, these people now can take care of their rights like other people, Risma said. (DAN/ES)(MMB/YM/Naster)