Sutopo Inspires All of Us, President Jokowi Says 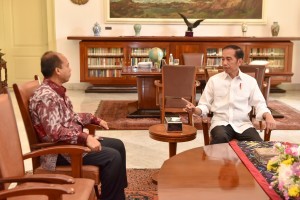 During the meeting, the President praised Sutopo for his work and said that Sutopo always provides swift response and clear information regarding disasters occurring in Indonesia, including quakes, landslides, or tsunamis. On that occasion, Sutopo and President Jokowi also discussed a lot of things about the disasters that hit Lombok and Palu.

“His explanation is clear and is easily understood by the public, and he spreads the information more than once in a day, President Jokowi said.

The President added that the work that Sutopo does inspires all of us since he is still committed to giving the best in his job regardless his health condition.

For the record, Sutopo has been diagnosed with a stage-four cancer and is undergoing chemotherapy. The cancer, however, does not prevent him in delivering updated information on disasters.

Sutopo further said that the he has been admiring the President since Jokowi was a mayor of Solo. “President Jokowi always thinks out of the box; always looks for alternatives and overcomes bureaucratic mindset, Sutopo concluded.  (DNA/JAY/ES) (RI/EP/Naster)