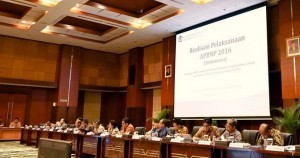 Minister of Finance Sri Mulyani Indrawati said that despite the macroeconomic conditions in 2016, both the global economic slowdown and economic conditions in the country that has not fully recovered, the deficit of the 2016 Revised  State Budget (APBNP) remained under control at a safe level of 2.46 percent of the GDP or Rp307.7 trillion.

“The realized temporary deficit is higher than the target in the 2016 APBNP, amounting to Rp296.7 trillion (2.35 percent of the GDP),” the Minister said at a press conference at the Juanda Hall 1 of the Ministry of Finance, Jakarta, Tuesday (3/1 ) afternoon. When it comes to the realized tax revenue that is lower than the target in the 2016 Revised State Budget, according to Finance Minister Sri Mulyani Indrawati, it is affected by lower economic growth in 2016 compared with the 2016 Revised State Budget assumptions and commodity prices which have yet to recover. “However, if compared with 2015, tax revenue performance in 2016 has increased by 3.5 percent. It is mainly driven by the tax growth in the non-oil sector of about 14 percent over the previous year,” the Minister said.

She mentioned the increase in tax revenue cannot be separated from the successful tax amnesty program. The revenue of repatriated funds derived from tax amnesty reached Rp107 trillion. “The outcomes of tax amnesty program is expected to be able to increase the tax ratio in the medium term through the increasing tax compliance as well as the expansion of a more valid, comprehensive, and integrated taxation data base,” Sri Mulyani said while adding that tax amnesty program will continue until March 2017.

On the other hand, according to the Minister, the realized temporary spending of the Ministries/Institutions (K/L) reached Rp677.6 trillion (88.3 percent against the 2016 Revised State Budget ceiling). If compared with the outlook after the savings (including natural savings), the Minister further explained, the performance of budget absorption of the K/L reached 100.8 percent. “This realization is higher than budget spending in 2015 at 92.0 percent,” the Minister said.

Finance Minister considered that the improvement of the realized expenditures of the K/L reflects the improvements in the budget implementation since early 2016. Besides, the performance of budget absorption of the K/L is also influenced by the policy of accelerated implementation activities including early auctions which runs effectively, reflected in monthly improved absorption which is higher compared with previous years.

“Accordingly, the Government has been able to manage the implementation of the 2016 Revised State Budget in a credible manner through measures to increase state revenue and expenditure efficiently and effectively in order to meet national development goals, that is, to realize a just and prosperous society,” the Minister concluded.