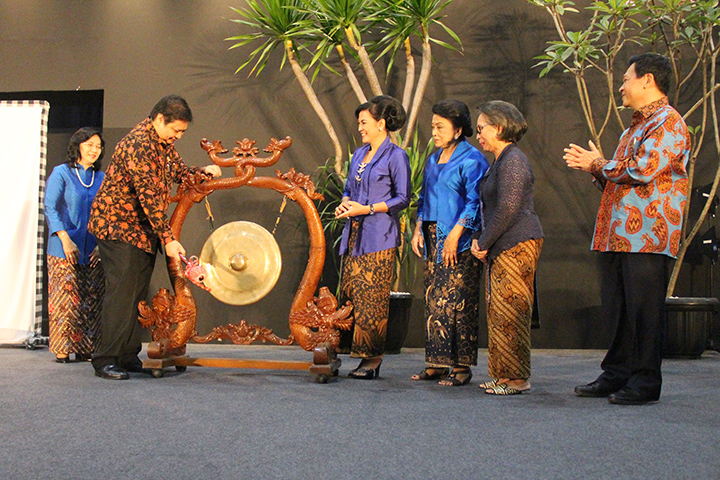 The industries of tenun (traditional hand-woven textiles) and batik have a significant contribution to the national economy, in which its export value in 2016 reached US$151.7 million.

Ministry of Industry is now promoting the work performance of export-oriented labor-intensive industries which can bring dual effect for equitable prosperity of the people, including through employment, Minister of Industry Airlangga Hartarto said at the opening of the 2017 Adiwastra Nusantara Exhibition on Wednesday (5/4), at the Jakarta Convention Center (JCC), Jakarta.

Ministry of Industry recorded that creative industry contributed Rp642 trillion or 7.05 percent of Indonesias Gross Domestic Product (GDP) in 2015. The largest contribution came from culinary sector with 34.2 percent, fashion with 27.9 percent, and craft with 14.88 percent. Moreover, creative industry is the fourth largest sector in national employment which employes 10.7 percent or 11.8 million people.

Minister of Industry is optimistic about the potential of tenun and Nusantara batik (the Archipelagic batik)  as it is supported by the richness of Indonesian culture that will produce various types of wastra (fabric) of each region with their own characteristics. Wastra nusantara (the Archipelagic fabrics) means traditional fabrics with strong cultural values. Each pattern has a meaning which adopted from the history and customs of the local community, Airlangga said.

Also on that occasion, Airlangga called on all players in fashion industry which are included in Small and Medium Industry (IKM) to join and use e-Smart program that was launced by the Ministry of Industry on 27 January 2017.

With e-Smart program, business players can broaden their market access through marketplace and they will get several management programs from us, Airlangga said.

To promote the products of IKM entering export markets, the Minister said that the Government provides Import Tax Waiver for Materials for Export Oriented Goods (KITE) and financing facility in the Indonesian Export Financing Agency (LPEI).

This exhibition is expected to promote Indonesian traditional fabrics which are produced based on cultural and intellectual property that will eventually manifest the growth of national fashion industry, Airlangga added.

Director General for Small and Medium Industry of the Ministry of Industry Gati Wibawaningsih said that currently there are 369 centers of tenun IKM  and 101 centers of batik IKM  all over Indonesia.

Over the past few years, wastra nusantara has been transformed into several fashion products, crafts, and home decoration with high added-value, Gati added.

According to the data from the National Statistics Agency (BPS) processed by the Directorate General for Small and Medium Industry of the Ministry of Industry, the value-added of IKM keeps significantly rising each year. It is indicated by the total added-value in 2016 which reached Rp520 trillion or increased by 18.3 percent compared to the figure in 2015. Meanwhile, the figure in 2015 increased from Rp373 trillion to Rp439 trillion or increased by 17.6 percent.

Gati added that her office took several strategic measures to boost the productivity and competitiveness of national IKM, for example by enhancing the partnership between IKM and domestic textile industry to meet raw material needs and increasing the competence of human resources and quality of the products through technical guidance and expert assistance.