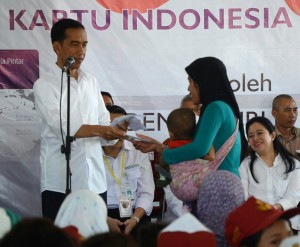 President Jokowi in an occasion hand over KIS to the people

President Joko Widodo (Jokowi) expressed his gratitude to all people of Indonesia, especially to owners of motor vehicles, which can understand the government’s move to divert subsidized of fuel oil (BBM) price to more productive sectors.

“Because of their participation, coupled with the savings of BBM being smuggled because of differences in high fuel prices, the fuel subsidy funds were diverted to people who are less capable and productive programs in the 2015 revised budget reached Rp 186 trillion,” President Jokowi said, as stated by President of the Communications Team, Teten Masduki, via short messages on Monday (25/5) morning.

The Budget diversion of the fuel (BBM) subsidies, according to President Jokowi as delivered Teten Masduki, in broad outline allocated among others:

2.    Adding health protection funds of Rp 422 billion, which is an extra card for Indonesia Healthy Card (KIS) with the increase of 1.8 million recipients, Rp 2.2 trillion for additional facilities to the national referral hospital

4.    Rp 3.3 trillion for the development of border fleet, information systems and marine logistics

5.    Rp 6.4 trillion for the education sector, among others, be used for an additional 10 million students, receiver Indonesia Smart Card (KIP), bringing the total recipients into 19.2 million students;

6.    Rp 16.9 trillion for the agricultural sector, among others, to increase food production through irrigation development, tools and agricultural machinery, fertilizers and superior seed;

7.    For the sector of public housing and public works, Rp 8.4 trillion for irrigation, dams, flood control. Rp 9.1 trillion for the development of drinking water, environmental sanitation, housing development, Rp 10 trillion of infrastructure of roads and border areas, and Rp 5.75 trillion in the construction of highways

8.    For the transportation sector, Rp 11.9 trillion in the construction of various types of ships, port facilities and information systems; and

9.    Increasing the Special Allocation Fund to help the region, amounting to Rp 9.3 trillion for irrigation infrastructure, Rp 4 trillion to agriculture, Rp 5 trillion for road construction and Rp 1.4 trillion for the improvement of health referral services.

According to President Jokowi, if diversion of subsidies is not done, the funds Rp. 186 trillion for the people who are less capable and productive programs above, just in the form of motor vehicle fumes.

“If the diversion of subsidies is not done, we have a time bomb that can explode at any time, because the government did not have enough money to help the poor and fund productive activities,” Jokowi said as presented by Teten Masduki.