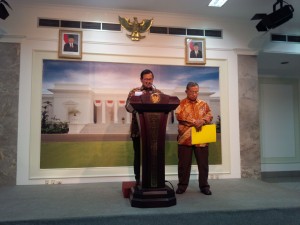 The Government announced an Economic Policy Package, at the Presidential Palace, Jakarta, on Monday (21/12) afternoon. Cabinet Secretary Pramono Anung mentioned that the 8th Policy Package is covering three points, among others; one map policy with 1:50,000 scale, development of energy security by accelerating the construction and development of domestic oil refinery, and incentive for aircrafts maintenance, repair and operations/MRO company.

The point is the Government anticipates its development and competitiveness in economy and global market, either at short, medium or long terms. It is because we must prepare to enter the ASEAN Economic Community (MEA) and the Government is now preparing to join several communities. This is the time to manage and to reform, Pramono said to the reporters, at the Presidential Office, Jakarta, on Monday (21/12) afternoon.

Meanwhile, the Coordinating Minister for the E            conomy Darmin Nasution who red the 8th Economic Policy Package said that the development of areas or infrastructures are often opposite with several issues relating with the utilization of space and land. The conflict is difficult to be solved because the Geospatial Thematic Information (IGT) overlaps each other.

Therefore, one map policy which refers to one geospatial reference, one standard, one database, and one geoportal in order to accelerate the implementation of national development has become one of the Governments priorities.

The same map reference base also increases the reliability of information related to the location of several economic activities. It will give business certainty as well. Several information which are compiled into one map could be used for a number of simulations, for example, for disaster mitigation, Darmin said to the reporters.

Through the Presidential Regulation on the Implemention Acceleration of One Map Policy, according to Darmin, the ministries and institutions will prepare a thematic map with 1:50,000 scale in accordance with their action plans, which deadline is by the end of 2019.

Therefore, the Cordinating Minister for the Economy believes the one map policy could easily and rapidly solve the overlapping of land utilization and boundaries problems in all over Indonesia.

Regarding the oil refinery, according to Darmin Nasution, the Government tries to materialize the construction and development acceleration of oil refinery in Indonesia. It is to meet the needs of fuel oil (BBM) and to reduce import over-reliance on fuel. This policy will be contained in the Presidential Regulation, Darmin  said.

Darmin said the demand of BBM which is higher than the current domestic supply, will keep increasing because the demand is keep rising, particularly on transportation sector. The gap between demand and supply is predicted to get widen around 1.2-1.9 million barrels per day in 2025 if there is no addition in production capacity.

The construction and development of oil refinery must be done by using a new technology, meet the provision of management and environmental protection, and naturally prioritizing the use of domestic products, Darmin said.

By meeting the needs of BBM from our own oil refineries, Darmin added, the Government believes BBMs selling price in business sector and in the society will be lower.

Regarding the deregulation relating aircrafts maintenance service company, Darmin Nasution explained that domestic industry until now is not capable to produce several aircraft components. Even if there is one, it does not have Part Manufacturing Approval (PMA) certification for aircraft manufacturers such as Boeing and Airbus.

Yet, according to Darmin, aircrafts maintenance service industry needs promptness in the process to import spare parts and components into aircrafts repairing process and maintenance.

The Coordinating Minister said that the current applicable scheme of Import Duty Paid by the Government (BMTDP) is hard to utilize by the aircrafts maintenance service company because it does not provide certainty to the procurement of needed goods. Therefore, the Government provides incentive in a form of 0 percent import duty for 21 postal rates relating spare parts and components for aircrafts maintenance and repair.