The Activity of Mount Raung Still High, President Jokowi Asks the Community to be Cautious 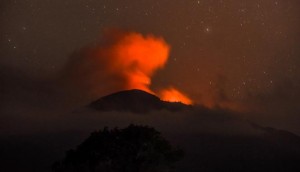 The Activity of Mount Raung Still High, President Jokowi Asks the Community to be Cautious

President Joko Widodo (Jokowi) asks the people who live nearby or those who traverse the area of Mount Raung, in Banyuwangi, East Java, to be cautious considering the mountain’s activity is still high.

“The Activity of Mount Raung still high please be careful,” Jokowi said through his twitter account @jokowi that uploaded on Saturday (11/7) night.

The President said that the government continues to work in the framework of disaster response for the safety of citizens.

As we know that since June 21, 2015, the volcanic activity of Mount Raung constantly increasing. Volcanic activity, characterized by bursts of ash, and the burst of incandescent material in the crater of peaks and Tremor Earthquake being recorded with the maximum amplitude continues to increase significantly, so that the level of activity of Mount Raung commencing on June 29, 2015, at 09.00 am was raised from Level II (Alert) to Level III (Standby).

Head of Public Communication Ministry of Transportation, JA Barata, in the statement on Friday (10/7) morning, states that the closure was based on Notam (Notice to Airmen) issued by the Directorate General of Civil Aviation, among others Notam No. A 1413/15 for closure Ngurah Rai International Airport, Bali.

On last Saturday (11/7), after considered harmless, those airports will soon be operating again, unless the Blimbingsari Airport in Banyuwangi is still closed.

However, on Sunday (12/7), the Garuda Indonesia airline has announced that all flights to and from Ngurah Rai Airport, Denpasar, being postponed in connection with the closure of the airport.

Breaking News 12 July 2015 10am (JKT time): Ngurah Rai airport Bali has been CLOSED again. The airport closure will be until 4pm Bali time. All flights from/to DPS are now being cancelled due to the closure. All passengers who are affected, may reschedule/refund their tickets, Read the announcement of Garuda Indonesia, as contained in twitter account @IndonesiaGaruda, a few moments ago.