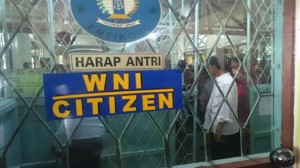 When reviewing PPLB Entikong that is the first land border crossings of Indonesia,  President Jokowi accompanied by First Lady Iriana Jokowi Widodo and Cabinet Secretary Andi Wijayanto seemed disappointed to see the condition of the border posts, which are considered not show significant progress.

“I’ve got the information, indeed it already more than 25 years there was no improvement, when we compared with neighboring countries indeed very far behind,” Jokowi said.

President assessess, that in terms of service and then to the physical building and others, PPLB Entikong is very far behind compared to the adjacent neighbor country. Therefore, in this year, said Jokowi, the government will begin to build this Entikong border region.

On that occasion, President Jokowi dialogues with local communities, which of them complained about the condition of the road of Entikong – Pontinak that has been heavily damaged.

After carrying out the review, President Jokowi and the entourage proceeded towards to Sanggau District to review the construction project of bridge Tayan (Humas Setkab/ES)