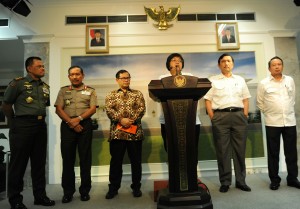 The Government considers that the condition of land and forest fires are still quite severe, and is required to take steps massif. Therefore, the meeting that was chaired by the President of Joko Widodo (Jokowi) decided to increase the number of aircraft that will be used in the prevention of forest and land fires in Sumatra, Kalimantan, Sulawesi, and Papua.

Coordinating Minister for Political, Legal and Security (Polhukam) Luhut B. Pandjaitan when the last time he saw the conditions in the OKI (South Sumatra) together with Head of BNPB Willem Rampangilei, National Police Chief Gen. Badrodin Haiti, TNI Chief Gen. Gatot Nurmantyo, and Minister of Environment and Forestry (LHK) Siti Nurbaya, claimed to have seen that this drought is still continuing and the condition is quite severe and deeply felt very hot and dry weather.

“We were riding a helicopter to look around. Apparently the condition of forest fires is still quite severe, so that the results of our traveling by helicopter for 1.5 hours to some point we see that the steps we have to do to be more massive,” said Luhut told reporters after a limited cabinet meeting at the office of the President, Jakarta, Tuesday (20/10) night.

To that end, Luhut explained, it has been decided by the limited cabinet meeting that we will add aircraft for fire fighting, both those in Sumatra, Kalimantan, Sulawesi, and Papua. May be increased to 15 aircraft. We’ll count it later rather roughly between 10-15.

“Indeed, we are still shortcomings aircrafts. The aid from abroad, from Australia had returned to Australia and Malaysia have also been returned. However, with Malaysia we’ve asked again, if possible to come again,” Luhut said.

According to Coordinating Minister for Political, Legal and Security, Pelican Bombardier aircrafts are very effective. The government has been ready and the Minister of Environment and Forestry Siti Nurbaya already booked, at least 5 aircraft tractor water comes.

“We hope might be 10 aircraft again we get, later BE200, and may the Pelican Bombardier may be 5 or more. We will try from Canada, from Russia, we try with Australia, or anywhere else, that can provide a good aircraft,” Luhut said.

“Conditions in the field are very heavy, the smoke billowed and the fire is very powerful. In fact, according to records, on Saturday that the fire is like moving either from below or from above, exceptional movement,” Siti said.

Related with the persistence of the efforts to conduct land clearing, or clearing land by the private sector or in the private lands and communities, according to the Ministry of Environment and Forestry Siti Nurbaya, in the meeting we have been discussed to prepare the revision of Law 32 of 2009 on the Protection and Environmental Management in the article 69 part explanation.. (UN/RAH/ES)/Sy.