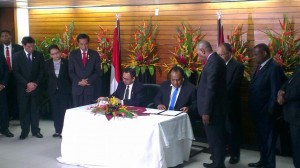 President Jokowi and PM of PNG Peter O’Neill witnessing the signing of cooperation by the Foreign Ministers of two countries in Port Moresby, Tuesday (12/5)

The state visit of President Joko Widodo (Jokowi) to Papua New Guinea, 11-12 May, has produced a number of agreements as outlined in the two documents MOU of cooperation between Indonesia and Papua New Guinea, in the Parliament House, Port Moresby, on Tuesday (12/5).

Minister of Foreign Affairs Retno Marsudi and Minister of Energy and Mineral Resources Sudirman Said signed the MoU; it has been agreed upon cooperation in cross-border crime, which includes both drugs and terrorism, and cooperation to increase the capacity of human resources for the exploration of oil and energy.

In the economic field, President Jokowi and Prime Minister Peter O’Neill agreed to increase cooperation in various areas, encourage the trade beyond the border market, encouraging the strengthening of investment cooperation and infrastructure as well as encouraging private sector involvement in the field of telecommunications energy and fisheries.

“We have also agreed to improve the connectivity,” the President said.

According to the President Jokowi, the two countries agreed to open the flight path between Garuda Indonesia and New Guinea Air, with lane Port Moresby-Denpasar-Jakarta and Port Moresby-Singapore-Jakarta.

President Jokowi called Papua New Guinea as close neighbor and friend tightly of Indonesia. Together PM O’Neill, President Jokowi wants to make the momentum of the 40th anniversary of diplomatic relations between the two countries closer and more intensive.

During the visit to Port Moresby, President Jokowi who accompanied by First Lady Iriana Widodo, took time to do a face to face and dialogue with the citizens who live and work in PNG.