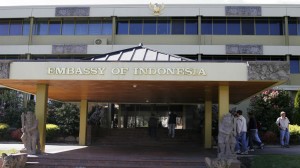 Embassy of the Republic of Indonesia (KBRI) in Australia, Friday (13/2), issued an appeal to the citizen and the Indonesian Diaspora in Australia to increase in awareness regarding the situation lately.

Although not specifically mention what is meant by the situation lately, one thing that underlies the appeal is due in the near future two Australians Andrew Chan and Myuran Sukumaran be executed in Indonesia.

In recent weeks, the news about the case of Chan and Sukumaran adorn many Australian media especially with regard to the possibility that they will be executed.

According to a spokesman for the Indonesian Embassy (KBRI) in Canberra, Sade Bimantara told reporters ABC L Sastra Wijaya Friday (13/2), they have received thousands of correspondence in the form of a letter, email, telephone, and others, on the development of such things, and we will convey to Jakarta

In his appeal, Social and Cultural Section of the KBRI requested that the citizen to keep calm and carry out the daily activities by increasing alertness, and always observing the development of the security situation in the surrounding areas through a variety of means.

KBRI also requested that the Indonesians (WNI) and the Indonesian Diaspora in Australia always bring valid identification, such as passports, student cards, identity documents, and adhere to local regulations.

Also not to be provoked by the actions those are provocative and avoid interfering in the domestic politics of Australia either verbally, writing in social media such as Facebook, Twitter, and other networking sites.

If there is a problem faced by Indonesian citizens in Australia, they are asked to contact the KBRI and the Consulate General/Consulate of the Republic of Indonesia in Australia via the hotline 24 hours on the numbers: