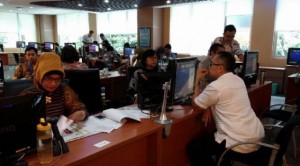 President Joko Widodo (Jokowi) is planned officially launch the National One Door Integrated Service (PTSP) in capital investment at the end of January 2015. President Jokowi expressed, PTSP will speed up the licensing of investment in Indonesia. To this purpose, the President Jokowi has called Head of Investment Coordinating Board (BKPM) Franky Sibarani to the office of President, Jakarta, Monday (19/1) morning.

Just as known, on December 15, 2014, BKPM has launched the Investment Licensing Issuance Services online, to facilitate the investors to access licensing services in the PTSP-BKPM.

Head of BKPM Franky Sibarani expressed that the online service for issuing of licenses in BKPM, is the preparation of BKPM as the executor of PTSP organizers as assigned by President Jokowi.

“Starting December 5, 2014, the entire licensing that issued by BKPM, the submission could be carried out online, so there is no face-to-face service. The Investors can apply from their  office and not necessary come to the office of BKPM, and they can monitor the process of issuance of licensing being applied via an online tracking system, ” Franky said.

Franky Sibarani added, that the issuing of licenses online services, is part of the efforts to make the investment climate in Indonesia to be better. “Licensing service that is fast, simple, transparent and integrated will improve the competitiveness of Indonesian investment, because streamline the licensing process becomes easier and concise,” he added.

Type of license and non-licensing application submitted online, as follows:

10.  Minister of Finance Decree on the exemption of import duty on machinery in order to: a. new projects; b. expansion project; c. changes / additions, and / or; d. restructuring / modernization / rehabilitation

11.  Minister of Finance Decree on the exemption from import duty on goods and materials in order to: a. new projects; b. expansion project; and / or c. change.

Franky Sibarani added, BKPM along with other ministries continues to prepare for the implementation of the National PTSP, which is targeted to begin in January 2015, the National PTSP infrastructure in BKPM, among other: back office, which will consist of the employees of various ministries which were-BKO to handle licensing, as well as supporting the information and technology systems.

“BKPM Coordination with other ministries are quite good. Each Ministry has appointed officials who are responsible for licensing integration process. Currently BKPM and the officials continue to work to finalize the process of one door licensing service at BKPM, ” Franky added. (WID/ES)