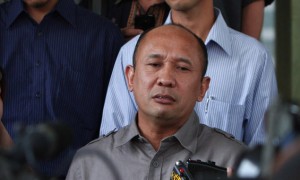 President Joko Widodo (Jokowi) in a limited cabinet meeting (Ratas) which was attended by the Vice President, Jusuf Kalla; Minister of Religion, Lukman Hakim; MUI chairman, Din Syamsudin; as well as some of the Rector of the State Islamic University (UIN), including the Rector of UIN Jakarta, Prof. Komarudin Hidayat, convey the idea to build a Moderate Islamic University.

“Moderate Islamic University that is really a great university, which will be the center of Islamic universities of the world,” President Jokowi said in the introduction remarks of Ratas held at the Presidential palace in Bogor, West Java, on Friday (5/6) afternoon.

The Communications Team of President, Teten Masduki explains, President Jokowi wants moderate Islamic teachings need to be maintained, because it can bring up the image of Islam in Indonesia that peace loving. So the assumption that Islam identical to the terrorism and anti-democracy can be refuted.

“It is expected that moderate Islamic university with the international standards can make a breakthrough in the teaching pattern with the teaching material about Islamic values that moderate in accordance with Pancasila,” Teten said in a press release on Friday (5/6) afternoon.

According to the Communications Team of President, President Jokowi hopes that with the establishment of Islamic University with international standards, then in the future, Indonesia could produce Islamic scientists, such as Ibn Sina and Ibn Rusyd, that their thoughts and their science recognized by the world until now.

The Strength of Indonesia

President Jokowi in the ratas suggests that in many meetings with Heads of State, he always said that Indonesia is the largest Muslim country in the world. “I always start with that sentence, because I think it is our strength now in world geopolitical and geoeconomic,” Jokowi said.

According to the President, the members countries of the Organization of the Islamic Conference (OIC) now provide enormous respect to Indonesia, because we considered very harmonious, our unity is also very good although we have a variety of religions and various tribes, and there are 17,000 islands.

Therefore, President Jokowi continued, together with Vice President Jusuf Kalla, he felt the need to have an idea about a Moderate Islamic University in Indonesia that truly a great university that will be the center of the Islamic world universities.

“If it is approved, then how the magnitude concept, then also its location, we immediately set and decide, and of course the funding will we swatch soon,” President Jokowi concluded.  (ES)