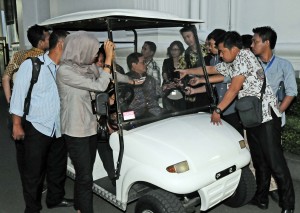 Cabinet Secretary Pramono Anung answered the questions of the journalists who stopped him after a limited cabinet meeting, at the Presidential Office, Jakarta, on Tuesday (22/12) afternoon.

Cabinet Secretary Pramono Anung explained that Indonesian Government has decided not to give visa-free entry facility to Israeli tourists because Indonesia and Israel do not have diplomatic relations.

To the journalists who stopped him after a limited meeting at the Presidential Office, Jakarta, on Tuesday (22/12) afternoon, Pramono explained that one of the Governments desire is the Independence of Palestine. It is also the spirit of President Joko Widodo and Vice President Jusuf Kalla.

So, once again, the Government also wants to put the independence of Palestine as the first priority since it is also the spirit of Pak Jokowi and Pak JK, Mas Pram, Pramono Anungs nickname, said.

In addition, Pramono also stated that the proposal to give that visa-free entry facility comes from the Government. However, after coordinating with the Coordinating Minister for Maritime Affairs and Minister of Tourism, the proposal was immediately dropped.

Besides Israel, according to Pramono, the Government does not give as well the visa-free facility to other countries that involve in conflict in the Middle East since it can affect Indonesias comfortableness and security. He also explained that other reasons for not giving the facility are constitution issues and conflict in those countries.(EN/JAY/ES)(MMB/YM/Naster)