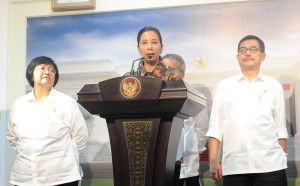 Minister of SOEs, Rini Soemarno when giving a press conference, at the Presidential office, Jakarta, Thursday (5/3)

Minister of State Owned Enterprises (SOEs) Rini Soemaro argues, it fully supports the government’s efforts to realize as soon as possible the construction of the Trans Sumatra highway, with the involvement of state-owned banks and other state-owned enterprises to support the financing.

In addition to state-owned banks, according to Rini, the construction of the Trans Sumatra highway will also be supported by the Infrastructure Bank, that is a combination from Government Investment Center (PIP) and Sarana Multi Infrastructure (SMI), that has received an injection of the state budget funds amounting of each Rp 18 trillion and Rp 6 trillion.

Surely, if later the amount financing is big, we expect that the state-owned banks whenever possible can participate,” said Rini told reporters at the Presidential Office, Jakarta, Thursday (5/3).

Rini described, in the construction of the Trans Sumatra highway, especially Bakauheni-Terbanggi Great-Kayu Agung, then it can be connected with the Kayu Agung-Palembang is very crucial, especially for economic pathways connectivity Java-Sumatra. The toll road is expected to operate at the ASEAN Games which according to the plan Palembang also become part of the host.

Therefore, in addition to the construction of this highway, said Minister of State, there is also an increase in crossing facilities of Merak-Bakauheni. “That will be additional of the docks, 4 docks in Merak and Bakauheni. But we must also will stressed further, how the road towards Merak, because now was already very dense, “he explained.

Related to the pier construction, Rini said that the government also looks likely to add to the railway line, as well as the possibility of additional ports in other places.

“Indeed, when viewed in its design now, the possibility of settlement in 2019, but we communicate continuously, working closely with the governor and the Minister of Public Works and Housing, Minister of Agrarian Affairs and Spatial Planning, as well as Ministry of Environment and Forestry. The goal is that, if possible, we can do with the land acquisition soon, so hopefully this highway can operate at the ASEAN Games later,” Rini said. (Humas Setkab/ES)