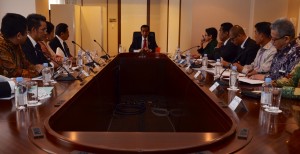 President Jokowi who was in Tokyo, Japan, expresses condolences on the death of former Prime Minister of Singapore Lee Kuan Yew, Monday (23/3) morning

The Government and people of Indonesia expressed deepest condolences over the death of former Prime Minister of the Republic of Singapore Lee Kuan Yew, at the General Hospital, on Monday (23/3) at 03:18 local time.

“The Government and people of Indonesia to pray that the bereaved family, the Government, the nation and all the people of Singapore are given strength and fortitude in facing an atmosphere of grief at this time,” President Joko Widodo (Jokowi) said in a press conference at the Imperial Hotel, Tokyo, Japan, Monday (23/3) morning.

President Jokowi who was on a state visit to Japan said that the deceased-former Singapore Prime Minister is having proximity to the Indonesian nation, known as the Founding Fathers of modern Singapore.

“As a leader and statesman who loved his people, he is also known as one of the influential political figures in Asia,” President Jokowi said.

President Jokowi assess, under the leadership of Lee Kuan Yew, Singapore has succeed in transforming itself on being major economic players in Asia and align with other developed countries.

“The Government and people of Indonesia believe that Singapore will be able to undergo this difficult time and can continue to develop according aspirations of the nation and people,” President Jokowi said.

The Singapore government has announced, since today until March 29 as a day of national mourning.

Lee Kuan Yew conditions reportedly continued to decline since admitted to the hospital on February 5, 2015 ago. Lee, who has aged 91 years, had been undergoing treatment in Singapore because of suffering from severe pneumonia. (Humas Setkab/ES)