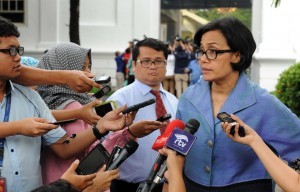 Minister of Finance Sri Mulyani responds to the journalists questions after a Plenary Cabinet Meeting, at the State Palace, on Wednesday (2/11) (Picture: Public Relations Office/Jay)

Although the economic growth in 2015 was 4.8 percent, while in 2016 it is around 5 percent, and it is projected to reach 5.1 percent in 2017, President Joko Jokowi Widodo expects 6 percent economic growth can be reached in 2018 State Budget. However, it is indeed not easy.

The President expects that growth momentum can be increased so we can accelerate poverty eradication as well as gap reduction, and there will be more job opportunities. This is an important issue, Minister of Finance Sri Mulyani Indrawati said to the journalists after the Plenary Cabinet Meeting at the State Palace, Jakarta, on Wednesday (2/11) afternoon.

In regards to the 6 percent growth, according to the Minister, as has been presented in the Cabinet Meeting, since global economy is still weak, the resources of economic growth from export are projected to contribute not more than 1 percent. It is slightly above 0 percent.

Therefore, the Minister firmly said, the focus of economic growth is domestic resources. The roles of investment as well as consumption are very important, both household and government consumptions,she further said.

Sri Mulyani explained that to reach the 6 percent growth, the Government will maintain State Budgets deficit not too high. Thus, the biggest resources are private investment, as well as Foreign and Domestic Investments that can reach more than Rp800 trillion.

Banking sector and capital market are expected to produce more than Rp1,300 trillion investment fund resources. Meanwhile, capital spending of State-Owned Enterprises is expected to reach close to Rp700 trillion so that the presssure to reach the target is not only on the Government.

According to Sri Mulyani, the President also emphasized to pay attention to all regulations as well as improvements to increase investment. Although the rating of Ease of Doing Business (EoDB) is now better, there are still a lot of aspects that need to be improved. In order to increase consumption more than 5 percent, inflation must be maintained under 4 percent until 2018.

Regarding the composition of the sectors, the Minister explained that agriculture sector is one of the sectors that is expected to develop.