The Government Raised the HPP of Sugar Become Rp 8,900 / Kg 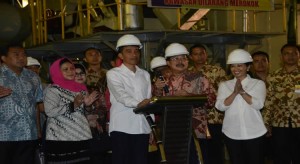 President accompanied by First Lady Iriana pressing the siren as the sign of the first milling of sugar production in 2015, in PG Gempolkerep, Mojokerto, East Java, on Thursday (21/5)

The government decided to raise the Farmers Benchmark Prices (HPP) of sugar, from Rp 8,500 / kg to Rp 8,900 / kg. This hike decision was conveyed by Minister of Trade Rahmat Gobel while accompanying President Joko Widodo (Jokowi) to dialogue with farmers and communities, in the Sugar Factory (PG) Gempolkerep, Mojokerto, East Java, on Thursday (21/5) afternoon.

President Jokowi also expressed, the HPP means that the government should be responsible and stock that could be used for the national stock, so everything could be controlled and farmers can avail sufficient margin. “I think the key is do no messing around, so the system will not be corrupted,” he said.

Minister of SOEs, Rini Soemarno who attended the occasion suggests, previously, in 2014 ago, HPP for sugar farmers amounting to Rp 8,500. However, the price of sugar farmers is not maintained so it often to be down.

Therefore, the government assigned PT Indonesia Trading Company (PPI) to be able to buy sugar farmers at a price of Rp 8,900 / kg. “PT PPI act as a national stock holder to maintain the stability of sugar prices, especially the price of sugar at the farm level,” Rini said.

According to the report from the Director General of PTPN X Subiyono, Sugar Factory of Gempolkrep will be ready to operate again in May 2015 with a target of 507.714 tones increased by 8.48 percent. (Humas Setkab/ES)