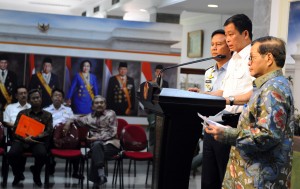 The Government thinks that North Javas flight route, i.e. Jakarta-Surabaya, is very busy. It reaches 150 flights/day. This route is now at number 11 of the worlds busiest route in the world. Meanwhile in Bali, the traffic is 170 flights/day.

Therefore, a limited meeting led by President Joko Widodo on Friday (8/1) afternoon suggested to relocate the training of the Indonesian National Defence Forces (TNI) so that it is not concentrated in air bases in Java, such as in Madiun, Yogya, and Malang.

The location of several trainings will be relocated outside Java, whether in Kalimantan or Papua. Of course, the proposal comes from the Air Forces Chief of Staff or Deputy Chief of Staff, the Cabinet Secretary, Pramono Anung, said to the journalists after the limited meeting at the Presidential Office, Jakarta, on Friday (8/1) afternoon.

Minister of Transportation Ignasius Jonan added that the limited meeting also discussed the utilization of South route in Java Island.

So, the deal withTNI is if the air space at South of Java is not used, it will be used by TNI and it will be arranged to be flexible so that it can also be used for civil flights, particularly from western part of Java, Jakarta, and Bali, Jonan said.

Regarding civil enclave airports, according to Jonan, it will be regulated together with the Air Force so that it can be used to increase the capacity or slot time for non-military flights when it is not used or in an emergency situation.

It is not the base that is relocated but the training, so that the training at home base can be reduced, Hadiyan said.(FID/ES)(MMB/YM/Naster)