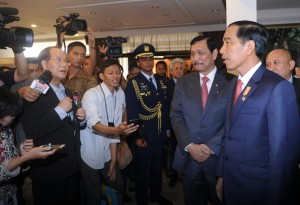 President Joko Jokowi Widodo asserted that it was the House of Representatives (DPR-RI), not the Government, who took the initiative to revise the Law Number 30 of 2002 on the Corruption Eradication Commission (KPK).

However, the President said, in the formulation of the revision, he expected opinions from the public first before the revision is included in the National Legislation Program (Prolegnas).

Ive once said, please ask for the opinions from the public, law experts, academicians, and anti-corruption activists, President Jokowi told reporters shortly after arriving from France at Halim Perdanakusuma Airport in East Jakarta on Wednesday (2/12).

President Jokowi also believes that the revision of the law carries the spirit to strengthen KPK and not to weaken it.

Echoing the Presidents statement, Cabinet Secretary Pramono Anung previously said that it was the DPR who took the initiative to revise the law.

Pramono also acknowledged that the law must indeed be strengthened.

So the revision is not meant to weaken KPK but to further strengthen it because there are several issues that cannot be resolved by this law, leading to many judicial reviews and pretrial petitions,  Pramono said to reporters on Tuesday (1/12).

Nevertheless, Pramono admitted that there are still several lingering issues in the revision of the law, among others the issues of investigation-termination warrants (SP3), wiretapping,  supervisory council, and independent investigators .(*/ES) (EP/YM/Naster)