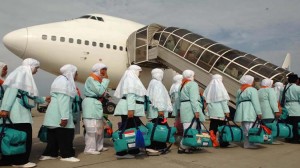 In efforts of preventing the spread of Ebola disease in Indonesia, pilgrims from Indonesia who would return back from Mecca need to do medical checkup.

General Director of Disease Control and Healthy Environment (PP and PL) of Ministry of Health, Prof. dr Tjandra Yoga Aditama wrote in his letter, on Wednesday (15/10) morning, that pilgrims who travel long distance are vulnerable in getting infected by Ebola disease as happened in Spain and United States, where those who infected by the disease have never been to Africa but got infected by their patients in Spain and United States.

These cases warn us that in such countries with advance personal protection equipment, the Ebola disease still could infected paramedics there. Therefore, we must cautious with the spread of Ebola disease through our pilgrims, said Prof. Tjandra.

Related to MERS CoV  respiratory virus that resulted in many casualties in Middle East, including Saudi Arabia, Prof. Tjandra Yoga Aditama said almost one million Asian (Indonesian and other Asian countries) are currently in Saudi Arabia, and have start to come back home, those needed to be monitored.

In addition, there are five preventive steps in tackling MERS CoV from getting in;

Prof Tjandra Yoga Aditama grateful that there is no MERS CoV and Ebola cases reported related to the arrival of Indonesian pilgrims until now. (ES)(Ifp)