The President Has No Fear, Cabinet Secretary Says 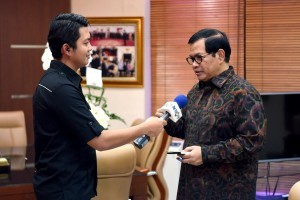 Cabinet Secretary has a special interview with Metro TV in his office at Building III of the Ministry of State Secretariat, Jakarta, Wednesday (31/1) afternoon (Photo: PR/ Agung)

In a special interview with Metro TV in his office, on Wednesday (31/1) afternoon, Cabinet Secretary Pramono Anung told the moment when President Joko Jokowi Widodo decided to still pay a state visit to Afghanistan, as part of his series of working visits to Sri Lanka, India, Pakistan, and Bangladesh.

Two days prior to the visit, together with Foreign Affairs Minister Retno Marsudi, he reported the latest situation in Afghanistan to the President. There was an ambulance blast that killed more than 100 people. Moreover, in the morning of the arrival day of President Jokowi there was an attack to a Military Academy in Afghanistan.<>

Nonetheless, President Jokowi still decided to go to Afghanistan. The President believes that security personnel of Afghanistan will protect him well.

Cabinet Secretary asserts that the President has no fear and he is confident that his security is guaranteed.

President Jokowis visit to Afghanistan is a very important symbol because it is part of his series of working visits to five countries: Sri Lanka, India, Pakistan, Bangladesh, and Afghanistan. It is a symbolization of Bung Karnos visit, including the visit to Sri Lanka. The last Indonesian President visited Sri Lanka was Bung Karno in 1962, while Afghanistan was visited by Bung Karno in May 1961.

Therefore, President Jokowis visit becomes a symbol of friendship between Indonesia and Afghanistan and it is also a return courtesy visit to President Ghani.

For the record, President Jokowi is also an initiator of peace process involving ulemas by inviting the HPC (High Peace Council) to Bogor Presidential Palace last year. The President also has a plan to organize a meeting of ulemas from Pakistan, Afghanistan, and Indonesia to facilitate peace process in Afghanistan.

Since the Cabinet Secretary knew the latest situation in Afghanistan from the intelligence and embassy reports as well as other sources, he admitted that he felt worried. Even, on the plane, Foreign Affairs Minister, Personal Assistant of the President, Coordinator of Special Staff to the President, and I were ready to wear bulletproof vest. However, after the President confirmed that he will not wear the vest, other members of the group did not wear it as well, except the Presidential Security Detail (Paspampres), Cabinet Secretary explains. (DNA/AGG/ES)(MMB/YM/Naster)