The President Scheduled for a Working Visit to East Java 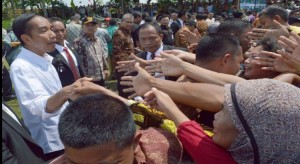 The President Scheduled for a Working Visit to East Java

President is scheduled to visit tourist sites of Talun Coban in the forest area of Batu City. President Jokowi scheduled to allot the three kinds of cards in the region of East Java on Thursday, May 21st. This is a program of social assistance provided by the government to the public. The three kinds of cards consists of Indonesia Smart Card (KIP), Indonesia Healthy Card (KIS) and Family Welfare Card (KKS).

Those three cards will be distributed in:

President is scheduled to visit the Islamic Boarding School (Ponpes) Bahrul Magfiroh, in the village of Tlogomas, Lowokwaru District, Malang City. In the Ponpes, the President was scheduled to distribute KKS as many as 17 pieces, KIP 5,046 pieces and KIS 5082 pieces.

In addition to dialogue with residents Tulungrejo Village, President Jokowi also will hand over 220 Indonesia Healthy Card (KIS), Indonesia Smart Card (KIP) and Welfare Family Card (KKS) to communities of Tulungrejo Village. Batu City residents those are entitled to those three cards from the central government as many as 6,229 people.

President Jokowi also be re-distribute social assistance fund for people with severe disability types. There are 23 recipients from Malang City; three recipients are from City Batu, as well as 13 others from Malang Regency.

In Surabaya, President Jokowi, is scheduled to inaugurate Terminal Teluk Lamong, Port of Tanjung Perak, Indonesia’s first green port. President Jokowi is also scheduled to witness the unveiling of the completion of the deepening and widening of the West Shipping Channel Surabaya (APBS). After revitalization, the depth of the APBS to minus 13 meters low water spring (LWS).

The seventh visit of President in East Java will end up in the Sugar Factory of Gempol Krep, Mojokerto.