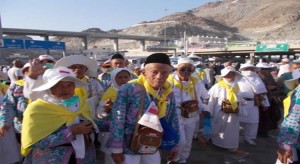 h. Surabaya embarkation of 2,801 US Dollars;

i. Banjarmasin embarkation of 2,924 US Dollars;

j. Balikpapan embarkation of 2,926 US Dollars;

k. Makassar embarkation of 3,055 US Dollars; and

As for the amount of BPIH for Pilgrims who follow Special Hajj Pilgrimage determined by the Minister of Religious in accordance with the provisions of the legislation.

“Payment of BPIH for the year of 1436 H / 2015 M conducted with American Dollars or Rupiah, accordance selling rate of Bank Indonesia transaction, which is applicable on the day and date of payment,” reads Article 4 Paragraph (1) Presidential Regulation No. 64 Year 2015.

Payment of BPIH is deposited to the  Minister of Religion Affairs account on Recipient Bank Deposit (BPS) of BPIH.

According to this regulation, the Hajj Pilgrims will accept returns of BPIH in terms of: a. Died before leaving to perform the Hajj Pilgrimage; or b. Cancel the departure due to health reasons or other valid reasons.

“Further provisions that necessary for the implementation of this Presidential Regulation stipulated by the Ministry of Religion,” reads Article 8 of the regulation.

“This Presidential Regulation shall enter into force on the date of enactment,” reads Article 9 of Presidential Decree No. 64 Year 2015 that was signed by the Minister of Law and Human Yasonna H. Laoly on May 21, 2015. . (Pusdatin/ES)