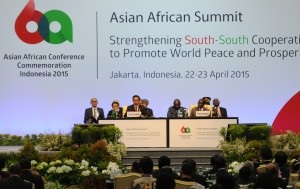 President Jokowi accompanied by the assembly chairman of the 60th of KAA conveys a press release, at JCC Jakarta, Thursday (23/4).

“The session has sent a message to the world that the conditions of life of the world is still unbalanced and far from justice, and away from peace. Therefore, Bandung Spirit is still very relevant, “said President Jokowi told reporters after the closing of the Summit.

Presented by President Jokowi, Asian-African Summit has developed a real step to pursue cooperation in a concrete contained in the Declaration of the strengthening the New Asian-African Strategic Partnership. In addition, the Summit also succeeded in preparing the operational framework of the monitoring mechanism.

“The foreign ministers were asked to conduct biennial meeting on the sidelines of the UN General Assembly in New York,” Jokowi said.

Other agreements resulting in the Asian-African Summit, President Jokowi continued, its importance for the strengthening of South-South Cooperation through initiatives and capacity building programs and technical cooperation.

While the Palestinian issue gained special attention, in addition to the adoption of the Special Declaration on Palestine, and strong support from the Summit meeting participants for the independence of Palestine and ready to assist in the development of human resources and institutional capacity for the Palestinians.

“I also delighted that the session agreed to set April 24 as a day of Asia Africa and establish Bandung as the capital of the Asian-African solidarity. In addition, it is also important that the support of the establishment of the Asia Africa Center in Indonesia,” President Jokowi said.

The President also expressed, on the sidelines of the Asian-African Summit, he had an informal meeting with the OIC member states and in the meeting, Indonesia called for unity and peace. Subsequently agreed; the first, completed three major challenges the Muslims, namely Palestine, terrorism, and internal-external conflicts that exist in the region.

Second, establish a task force or a group contact to establish the framework and communication framework to solve the problem. “OIC countries also expressed big expectations for Indonesia to play an important role in addressing the problems in the Islamic world,” Jokowi said.