The Results of the Summit Must be Beneficial, the President Says 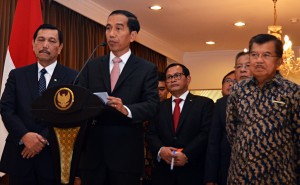 President Joko Widodo arrived at Halim Perdanakusuma Airport on Friday (19/2) morning after attending US-ASEAN Summit in the United States. The President and his entourage arrived at 9.35 a.m. Western Indonesia Time and were welcomed by Vice President Jusuf Kalla as well as several ministers.

In his press statement, the President conveyed the results of his working visit to the US. First, the President said that the result of the Summit must be beneficial for peace and prosperity, either to Indonesia, ASEAN countries,or the world.

Second, the President also emphasized the importance of our support to micro, small, and medium enterprises in this era of economy openness and digital technology innovation.

I did not just say it in the Summit, but I took a concrete action in my visit to Silicon Valley, the President told the journalists at Halim Perdanakusuma Airports VIP room, Jakarta, on Friday (19/2) morning.

Based on his meetings with Facebook, Google, Twitter, as well as Plug and Play, the President explained that they have committed to taking part in developing Indonesias digital economy. With Google, for example, there is a commitment to hold a training for 1,000 technopreneurs until 2020. In addition, the cooperation with other companies will also be followed-up.

Third, I also highlighted the message of peace in the Summit, particularly when I became the first speaker in counter terrorism discussion, the President said.

This message of peace, according to the President, was also immediately followed-up at the visit to Silicon Valley. The President invited social media industry to join in spreading the values of tolerance, moderation, and peace.

I am also happy that they were very enthusiasts in helping our initiative which we called empowering leaders of peace, the President said at the end of his statement.