The Results of the Visit of President Jokowi to Brunei Darussalam 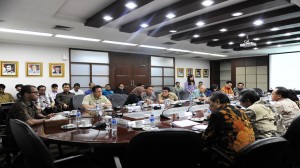 President Joko Widodo (Jokowi) accompanied by First Lady Iriana on Saturday (7/2) paid a visit to Bandar Seri Begawan, Brunei Darussalam, as part of the trip to Malaysia, Brunei, and the Philippines.

Minister for Foreign Affairs Retno Marsudi on the sidelines of President Jokowi visit to Brunei Darussalam, told to reporters upon his arrival at the Istana Nurul Iman, the residence of Sultan Hassanal Bolkiah, that President Jokowi has led bilateral talks.

The result of the talks the two heads of state according to Foreign Minister are as follow::

1. The two leaders agreed to boost the cooperation on employment and people-to-people contact. As we know, there is a distinctiveness of Indonesian citizen (WNI) in Brunei, which accounted for approximately 1/6 of the total population of Brunei, and the majority of the Indonesian Workers (TKI), including professionals, who work as doctor, a flight attendant, etc.

“Therefore, we need to increase the cooperation in the field of employment, and at the  meeting, Sultan of Brunei also expressed his appreciation and gratitude to the President of Indonesia, that migrant workers have contributed substantially in the economy of Brunei Darussalam,” Minister of Foreign Affairs said.

2. In the bilateral meeting of the two leaders also agreed to boost trade and investment. With the signing of the cooperation between the Chamber of Commerce and Industry (Kadin) between the two countries, then expected bilateral trade is increasing.

4. The two leaders also had discussions on the issue of ASEAN, the President requested the support of Brunei Darussalam Darussalam that ASEAN should have a legal instrument for the protection of migrant workers. This has been delivered at the meeting of the ASEAN Foreign Ministers in Kinabalu, Malaysia,” Minister of Foreign Affairs said.

Minister of Foreign Affairs also added that President Jokowi also directly invited Sultan Hassanal Bolkiah to attend the Asian-African Summit and the Commemoration of 60 Years Asian African Conference to be held in Jakarta and Bandung, at the end of 2015.

Quoting the President Jokowi, Retno Marsudi Foreign Minister said, that the relations between Indonesia and Brunei Darussalam is the most stable relationship, no crucial issues that must be resolved. “The task of the two countries is to improve the relationships,” Minister of Foreign Affairs said.  (RHT/ES)