The Search Continues, President Jokowi Invites all People Pray for the Safety of the AirAsia Passenggers 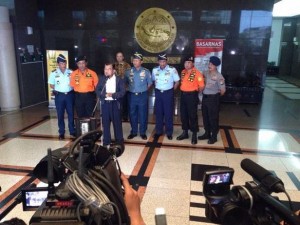 Despite being on a working visit to Papua since Saturday (27/12), the attention of the President Joko Widodo (Jokowi) could not be separated from the problem of loss of QZ8501 AirAsia plane, on a flight from Surabaya to Singapore.

“I also pray to Allah Almighty for safety of all passengers of Air Asia plane QZ8501,” and invites all Indonesian people to pray to God in order that 155 passengers and 6 crews of AirAsia plane QZ 8501 survived without lacking anything.

Previously, President Jokowi said that the search of AirAsia plane QZ8501, which disappeared on a flight from Surabaya to Singapore, Sunday (28/12) morning, carried out jointly between the Ministries, TNI, Polri, National Search and Rescue Agency (Basarnas), and Maritime Security Agency (Bakamla).

As reported previously that AirAsia plane QZ8501, which departs from Juanda Airport, Surabaya, on Sunday (28/12) at 5:20 am, has been reported lost contact at around 6:17 am or one hour after flying. Until now, there has been no further information on the position of the plane now.

Vice President Jusuf Kalla while reviewing Basarnas office, Sunday (28/12) afternoon said that the Government has mobilized all the capabilities and existing resources to find the Air Asia plane QZ 8501.

“The government has ordered the National Search and Rescue Agency (Basarnas) and the Navy to optimally deploy existing capabilities and equipment owned by searching for the plane on land and sea,” said Vice President JK told to reporters at a press conference at the Basarnas office. Vice President ascertain, search operations will continuously improved on Monday (29/12), by monitoring that the possibility of the aircraft is in the last position. “The search for a week then can be evaluated,” said the Vice President.  (ES)