The Upcoming Election Should be About Programs and Platforms: President Jokowi 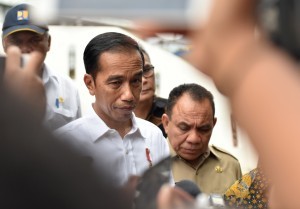 Competition in the upcoming election should be conducted in a fair manner so that the voters will become smarter and wiser about politics, according to President Joko Jokowi Widodo.

I think the competition in the election should be about ideas, achievements, and track records, President Jokowi further said.

The President went on to say that the voters in 2019 legislative and presidential elections should avoid sensitive issues, including SARA (ethnicity, religion and race) or defamation.

I think (SARA or defamation) will hamper the maturity of our democracy, President Jokowi concluded.

Also present during the event was Presidential Chief of Staff Moeldoko.