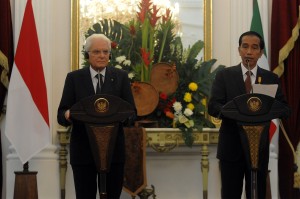 Concrete results have been achieved by Indonesia in the visit of President of the Republic of Italia Sergio Mattarella, who brings 30 top entrepreneurs from that country, Italia to Jakarta, Monday (9/11) afternoon.

President Joko Widodo (Jokowi) explained that the delegations of the two countries discussed the improvement of bilateral relations, particularly in the economic field. “During this visit the President Italaia brought 30 businessmen from Italy with a contract value of an investment of 1.055 billion US dollars,” said President Jokowi told reporters at the State Palace, Jakarta, Monday (9/11) afternoon

According to the President, the investment contract was made up of new cooperation in the field of energy, logistics, infrastructure, automotive, and tourism.

“I am happy that in this meeting we signed an agreement on visa exemption for holders of official passports of Indonesian citizens in Italia, as well as cooperation in the fields of leather industry, fashion, furniture, as well as tourism,” Jokowi said.

While related to cooperation in the energy sector, according to the President Jokowi, Indonesia and Italia reached agreement in the CPO industry, which at the end of 2014 recorded a total trade reached 4.01 billion US dollars. While the investments of Italia companies in Indonesia amounted to 63.02 million US dollars. (ES)/Sy.