The World Bank Projects Indonesias Growth in 2016 Will Reach 5.3% 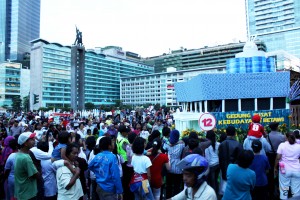 The World Bank Projects Indonesias Growth in 2016 Will Reach 5.3%

The World Bank admitted that 2015 that will end soon is a year that full of challenges for all policy makers in all over the world. Particularly in Indonesia, besides global economic issue, this country must also encounter forest fire and smoke problems, as well as economic slowdown. However, it is projected in 2016 Indonesias economy will be better. The World Bank projects 5.3% economic growth in 2016 or higher than growth projection in 2015 that is 4.7%.

The World Bank Lead Economist for Indonesia, Ndiame Diop explained that this years forest fire and smoke cause 1.9% loss to GDP. He mentioned that forest fire seriously impacts regional GDP.

Economic loss due to this years forest fire and smoke is two times bigger than the cost of Aceh reconstruction after Tsunami, Ndiame said at the launching of Indonesias three-month report, in Jakarta, on Tuesday (15/12).

For next year, in Ndiames view, there is an improvement of spending composition in 2016 Budget. Nevertheless, he reminded, it all depends on the implementation.

Ndiame projects economic growth in 2015 will be around 4.7%, whereas next year, the figure is higher, around 5.3%

However, Ndiame reminded that there is still a challenge for Indonesia, that is global economic growth probably still would be dissapointing. Moreover, low State Revenue can also be a barrier for Indonesias growth.

Meanwhile, economist Raden Pardede believes that Indonesias economy will be better, although it is not as fast as we want.

He also thought that State Revenue must be boosted. However, he reminded notonly to rely on tax sector.

It is hard to increase the revenue from tax when the economy slows down. It needs other ways, he said.

According to Raden Pardede, the Government must revise the budget as soon as possible because previously the budget drawn up based on unachieved revenue target. Indonesia actually has money, but it should be used properly, he said. (MMB/YM/Naster)