There is no Hammer and Sickle Symbol in New Rupiah Banknotes 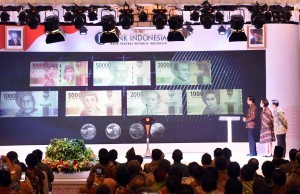 The Governor of Bank Indonesia (BI) Agus D. W. Martowardojo reaffirmed that the newly lauched Rupiah banknotes do not contain the forbidden symbol hammer and sickle. It was extended by the Governor to respond the information and interpretation that spread in the community. Rumour says Rupiah contain the forbidden symbol. Some people think that the logo of Bank Indonesia is a hammer and sickle symbol. Actually, the logo is cut diagonally so it forms irregular ornament, Agus said as quoted from the press release of Bank Indonesia, on Tuesday (10/1) morning.

According to the press release, the logo is a rectoverso picture which is part of security features of Rupiah banknotes. These features aimed to facilitate the people to recognize the authenticity of the money as well as to prevent counterfeiting.

The rectoverso picture was printed using a special technic so that it splits at the front and back sides of the note. The banknote should be held up to a light to see the whole picture.Rectoverso is commonly used as one of security features in various world currencies, considering it is difficult to be made and it needs a special printing tool, the press release wrote while adding that in Indonesia the rectoverso has been used as Rupiahs security feature since 1990s. In the meantime, the logo of Bank Indonesia has been used for Rupiahs rectoverso picture since 2000.