There is No Manipulation in President Jokowis Dialogue With Suku Anak Dalam, Cabinet Secretary Confirms 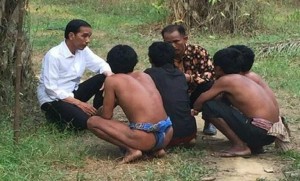 President Joko Widodo had a dialogue with Suku Anak Dalam, in his visit to Sarolangun, Jambi, last Friday (30/10)

Cabinet Secretary Pramono Anung straightens the issue on social media concerning the dialogue between President Joko Widodo and Suku Anak Dalam indigenous tribe in Sarolangun, Jambi, on Friday (30/10) afternoon, as a fabrication, by showing two pictures that indicate this fabrication or manipulation.

We would like to extend to all of you, since it widely spreads on social media, that there is no manipulation in the photo when the President visited Suku Anak Dalam. There is no such manipulation, Pramono said to the journalists in his press statement at the Presidential Office, Jakarta, on Monday (2/11) afternoon.

Cabinet Secretary explained that there was one person, i.e. Husni Thamrin, that served as the interpreter when talking to Suku Anak Dalam. He, who was wearing batik, can be spotted in those two photos.

According to Cabinet Secretary, the distance between the place where the President met Suku Anak Dalam when they were going out the forest, and the location of the shelter was about 600-800 meters. Therefore, in Pramonos view, the rumours developed by several people on social media was unethical.

The President and several journalists were definitely there. There was no photo manipulation whatsoever. It is not the character of our President, Mas Pram, Pramono Anungs nickname, said.

He affirmed that President Joko Widodo, in every visit, only wants to show the real condition. Although the schedule has been arranged, when the President knows that it was prepared two days or one day before, it must be immediately cancelled, Pramono added.

He further explained, the President expects that he can visit the places that really need policy or decision from the President.

Rumah Singgah (shelter house) in Palembang, for example, is real. The location is in slum area. It becomes the attention of the President during this time.

On that occasion, beside having a dialogue with the people of Suku Anak Dalam and handing over assistance package, that contains staple foods and Healthy Indonesia Card (KIS), President Joko Widodo also took time to visit Orang Rimba housing complex and gave them assistance, including offered them a house.    (MMB/YM/Naster)