There Must Be Collective Efforts to Fight Corruption, President Jokowi Says 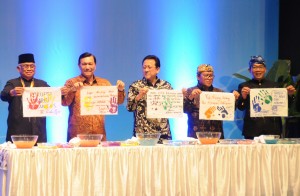 At the commemoration of the International Anti-Corruption Day at Sabuga Building in Bandung, West Java, on Thursday morning (10/12), Coordinating Minister for Political, Legal, and Security Affairs Luhut B. Pandjaitan read the remarks of President Joko Jokowi Widodo.

In his remarks, the President called on all elements of the country to strengthen our common spirit, namely Indonesia that is free from corruption.

The President added that the common spirit would not be materialized if the people were not united to fight corruption.

President Jokowi also said that without synergy among state institutions to fight corruption, it is corruptors who would be happy.

In fact, the President added, the countrys challenges in the future would be hard.

According to the President, Indonesia is now entering a new era, when nations are in competition.

The President also noted that Indonesia would not be able to compete with other countries or would be even left behindfrom other nationsif Indonesia is not efficient and if corruptbehaviors are practiced massively and systematically.

There must be a collective effort and participation from 250 million Indonesian people to jointly fight corruption, starting from our own closest environment, he added.

President Jokowi also expressed his belief that if all elements of the country are actively involved, there will be creative ideas, courage and firmness to fight corruption in the country.

He added that the Government would lend its support to all measures to prevent and eradicate corruption.

We must not fail to fight corruption because this nation will be a great nation if we are free from corruption, the President concluded his remarks.