These Regions Achieve Raskin Award of 2014 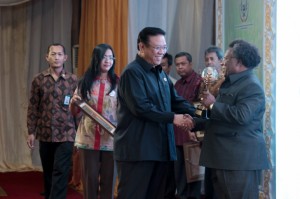 These Regions Achieve Raskin Award of 2014

For General category three Regencies and three Cities are selected to be the top three. While four Regencies / Cities are chosen for the best in Particular category, that were; Best Local Government Participation, Best Community Involvement, Best Transparency Program, and Best Innovation on Raskin Distribution.

Previously, the selection of winners carried out by a team consist of Central Raskin team, team from Coordinating Ministry for Kesra, BULOG, BPS, TNP2K, government institutions together with universities. There are phases of selection; Desk Evaluation, Questioner, Direct Interview With RTS, Descriptive Evaluation on Performance during 5 recent years which is done by the local government (Regency/City) in conducting Raskin Program.

First result gives best 50 Regencies / Cities. Next, depth evaluation is carried out to check other aspects related to Raskin Program, until 18 Regencies/Cities are set as the Raskin Award Nominees of 2014. After that, site visit is done by Verificator team consist of Coordinating Ministry for Kesra, BULOG, TNP2K, BPS and Universities.

The result from verification and interview process is comprehensively analyzed to set final winners. The assessment is based on four aspects that are Management of the Program, Local Government Participation, The Accuracy of Raskin Program, and Community Involvement. The final score of each participant is cumulative calculation using certain formula combined with specific consideration based on comprehensive aspects.(Humas Kemenko Kesra/ES)(Ifp)