This Afternoon, the Selection Results of the Constitutional Court Judge Reported to the President 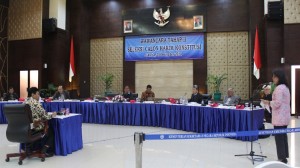 This Afternoon, the Selection Results of the Constitutional Court Judge Reported to the President

The Selection Committee (Pansel) of Constitutional Court from the government elements led by Saldi Isra, will report on the work of Pansel to President Joko Widodo (Jokowi), in the office of President, Jakarta, on Monday (5/1) at 13:00 p.m.

In the first stage of selection has been chosen 15 candidates of Constitutional Court, including the Chief of MK, Hamdan Zoelva, who a number of non-governmental organizations (NGOs) supported his candidacy. However, Hamdan chose not to follow selection conducted by Pansel for the reason that he had followed in 2010, and currently he is still serving as Chief of MK.

“The steps of selection are a series, ranging from the administrative selection, the first round of interviews, and a second round of interviews. Those who qualify for the next steps are that follows those stages, “said Saldi Isra told reporters on the sidelines of the selection of Constitutional Judge at the Ministry of State Secretariat, Jakarta, Tuesday (23/12).

Pansel has implemented the second stage of selection to the five candidates who passed the first stage on Tuesday (30/12) ago in Building III, Ministry of State Secretariat, Jakarta.